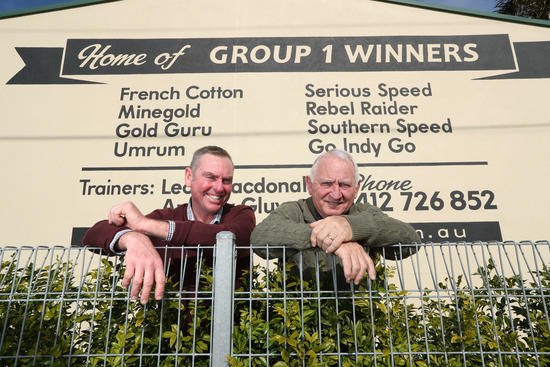 Well, what a wonderful season 2016/17 was for the Macdonald Gluyas Racing Stable.

We were the Leading Metropolitan Trainer with 49 wins and were overwhelmed to receive the C S Hayes award for the South Australian Trainer of the Year at the recent Racing SA Awards held at the Stamford Grand. This is most prestigious to win this award as we all know what Colin Hayes meant to South Australian racing.

Of course, none of this would have been possible without the magnificent support of our Owners. We have a great group of people involved in our stable and appreciate the involvement of each and every one of you.

A special thanks also go to our staff who have worked tirelessly throughout the year to ensure the horses are expertly cared for and we can guarantee they are in great hands! Long-time staff members Brian, Yuichi and Tako continue their great work, ably assisted by Lauren, Kim and Molly. It would also be remiss of me not to mention Tamara Zanker who has had great input.

Andrew Gluyas who has been with me at the Stable for 16 years works incredibly hard ensuring things run like clockwork and without his input the success we achieved would not have been possible.

Speaking of long associations, a 17 year association with Clare Lindop has proved yet again that loyalty is a major factor in our success. 6 days a week - 52 weeks a year, Clare is at the track riding track work at 5am, discussing the horse’s progress and mapping out programs with us. She is a very important member of our team, and deserves to be recognised for her outstanding effort.

Later in season we welcomed Raquel Clark to the stable as our new apprentice, and all we can say is look out! She is riding in terrific form and we would expect Raquel to be a much sought after rider in the coming season. We’re glad she’s with us!

As any proud coach would do, I would like to name all the horses that helped us achieve our premiership this year. Whilst we have named each winner, there were also quite a few horses who ran great races and placings but didn’t break through for victory.

Not to single any performances out, however we must commend Counter Pulse and Strategic Demand who both won 5 metropolitan races and were equal runners up for the 2016/7 Horse of the Year. I guess they would have won Best Team Player if there were awards being given!

In closing, be assured we will never rest on our laurels! There are some nice horses coming through the stable at the moment aiming towards the Spring and we’re really excited about the prospects of horses such as Glam Guru, So You Too and Danger Deal.

Pam and I thank you all again for your continued support and here’s to 2017/18.