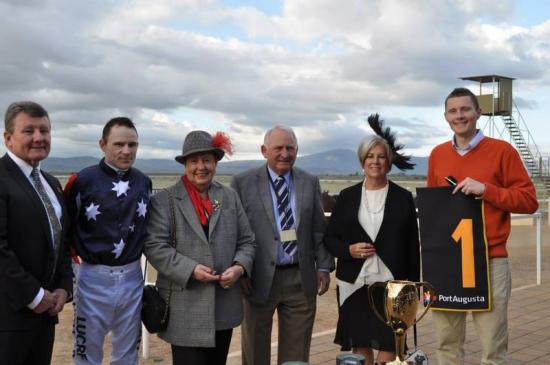 Last Sunday we travelled to my old home town of Port Augusta and Gossip Guru saluted giving us our 2nd Port Augusta Cup.

While bigger races have certainly been won, it's always a thrill to return to where I spent my younger years and win the Cup. It was great to catch up with old friends John Martin, Geoff Fullerton and Malcolm Dixon who were great mates when we were growing up.

Gossip Guru was given a perfect run in transit by Jason Holder and proved too strong in the finish.

The ever reliable Daytona Grey was very impressive in winning the Benchmark 90 race at Morphettville the day before. He won with plenty in hand and will continue to race on towards the Spring Stakes in August.

Cavaloce went to Balaklava on the following Wednesday and continued our good run when she won the Maiden event at her fourth run in a race. She looks to have a reasonable future.

To top the week off, stable war horse Nearest To Pin returned to Flemington and took out the $150,000 All Victorian Winter Series. Ironically the only horse in the field not Victorian was the winner! He was given a perfect run by Nick Hall and proved too strong at the finish (for all the Vic's!).

Jason Holder has been doing a fine job for the stable, and we hope he can win this season's South Australian Jockey's Premiership. He is currently 2.5 wins behind Dominic Tourner and it looks like it will go right down to the wire.

The stable is always looking to the future, and currently we have some nice yearlings available. If you are interested in becoming involved in a share, I would be happy to send you details.

Looking forward, Spring time is just around the corner and we hope to be competitive in the feature races in Melbourne. With horses like Go Indy Go, Essay Raider, Burgundy Blast, Gamblin' Guru and of course Daytona Grey and Nearest To Pin representing the stable, I think we have cause to be optimistic!

Lastly, birthday wishes to my son in law Terry McAuliffe, the voice of racing in South Australia, who this weekend turns 50! Happy birthday mate.