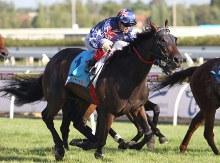 A hefty impost didn’t prevent Southern Speed resuming with a win on Australia Day Southern Speed launched her Dubai Australian Cup campaign in the best possible fashion, scoring an against-the-odds win in the John Dillon Stakes at Caulfield on Thursday.

It was the pride of South Australia's first run at The Heath since winning last year's BMW Caulfield Cup and co-trainer Leon Macdonald was thrilled to see her come back with a win.

“I was expecting her to be running on strongly, you always doubt whether they can win at 1400 when they're a staying horse, but she really showed her class,” Macdonald, who trains Southern Speed in partnership with son-in-law Andrew Gluyas, said.

That was reflected in the performance of the daughter of Southern Image. Third last when resuming in the 1200m Cockram Stakes in the spring, Southern Speed relished resuming over 1400m this time around.

After settling midfield, Southern Speed travelled into the race rounding the home turn before finding an opening midway down the straight to let down impressively to score running away.

The $9 chance won by three quarters of a length from former Northern Territorian, Shout Out Loud ($6), with 1400m specialist Danzylum ($11) just a short half head away third.

White-hot jockey Craig Williams, who partnered Southern Speed to Caulfield Cup glory, was thrilled with the effort of the mare who has now won five of her 14 starts.

“When I was looking for a run I was asking for her and she just kept lengthening and lengthening and when I got to the run it was there for her to go and it just worked out really well,” Williams said.

“It was like trackwork for her. The gallop worked out well for her and she was really strong on the wire. It's a great start to the autumn campaign.”

Southern Speed's reward was first-up success is a second-up stoush with Black Caviar, in the $400,000 Group 1 Sportingbet C.F. Orr Stakes (1400m) at Caulfield on February 11.

“If we run a nice second I'll be happy,” Macdonald said when asked if he thought his stable star could beat the champion mare, who resumes in Friday night's Group 2 Australia Stakes at Moonee Valley.

Following the Orr Stakes, Southern Speed will progress to the $200,000 Group 2 St George Stakes on February 25, again at Caulfield, ahead of the $1 million Dubai Australian Cup at Flemington on March 10.